Todays stage incorporated a ceremonial start over the Limerick Greenway, starting at Newcastlewest and emerging at the home of the Ardagh chalice, were the racing proper began.

In a two-man sprint to the line, Adam Ward of Team Ireland took FBD Insurance stage winners honors from Roscommon man Daire Feeley of the Cork – All Human Velo Revolution Team. As a result, Feeley captured the coveted yellow jersey from David Louis Sutton of the Spanish team, who now slips to 2nd overall in the general classification at 51 seconds.

They were followed over the line by Luke Smith (Team Meath Moynalty) who put in a fine performance on the longest day of the 2022 Rás to take third place.

Daire Feeley also picked up the Bective Stud sponsored County rider award in addition to the Cycling Ireland King of the Hills polka dot jersey and to top a successful day on the road, the Festina watch sponsored, daily county rider prize for his efforts. 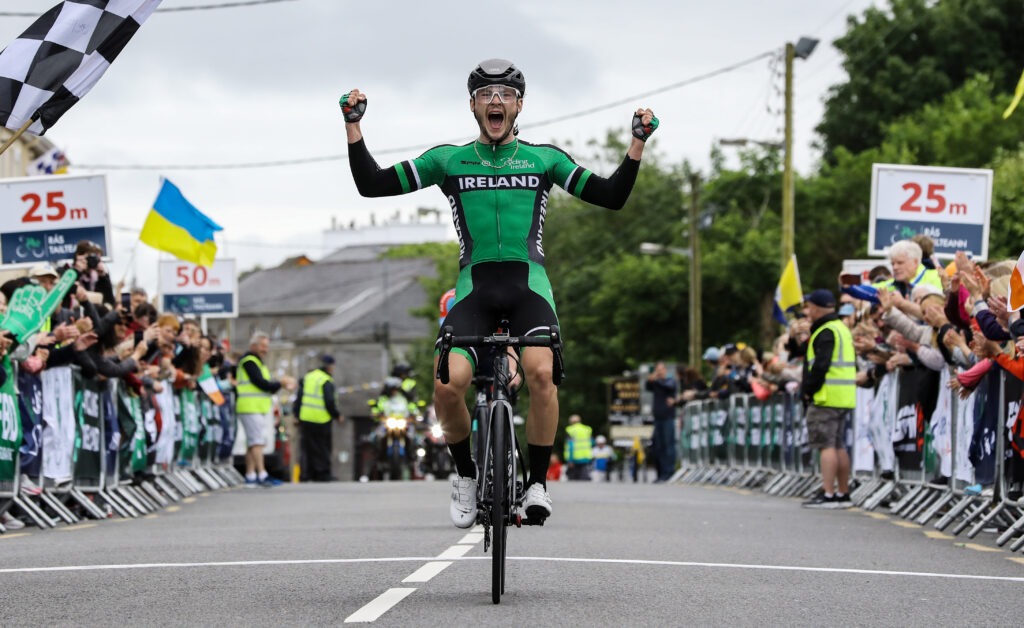 Today’s stage 3 of Rás Tailteann 2022 saw the 153 starting riders faced with a 172.1km journey from Newcastlewest to Lisdoonvarna. After stage victory yesterday, race leader David Louis Sutton of visiting team Brocar-Ale was presented with the race leaders Cycling Ireland yellow jersey which he would wear throughout todays stage 3.

After the flag dropped, the race took off at a blistering pace reaching speeds of 60 km/hr on the approach to Adare. The first break of the day came when Daire Feeley, Cork: Velo Revolution and Rhys Kenny – Dublin: UCD went clear building a gap of 10 seconds over the peloton. However, the peloton spotted the danger in Feeley after his efforts yesterday, and along with Kenny, were reeled in as the race came back together going through Croagh. It didn’t take Feeley long to go on the attack again as a group of nine riders including himself built a dangerous early advantage going through Adare. That group of nine consisted of:

After building a gap of 4’30, Daire Feeley moved into the virtual yellow jersey on the road. Despite a crash in the peloton, which caused Spin11 under 23 white jersey  holder Matthew Devins of Trinity Racing forced to pull out of the race. Yellow jersey David Louis Sutton sensed the danger and marshaled his teammates to the front of the peloton to instigate the chase as the race approached Ennis with 60km of racing remaining.

Although the chase brought the gap down to 2’30 at one point, it was clear Feeley had other intentions as he went clear with Adam Ward of team Ireland with 25km of racing remaining. As the leaders crossed the category 2 KOH on the infamous Corkscrew hill, they held a gap of 1’00 over 6 chasers with a fragmented yellow jersey group further back, chasing @ 2’20 in arrears. On the approach to Lisdoonvarna, Feeley continued to drive the break on for precious time with Ward kicking in the last 200m to take stage victory.

The race continues tomorrow Saturday with stage 4, 154.1 kilometres from Lisdoonvarna to Kilbeggan.